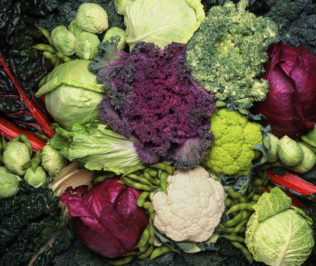 Are You Eating These Cancer Fighting Foods?

There are so many foods we are told to avoid and stay away from; nevertheless, there are many we should be eating more of. This list consists of five cancer fighting foods.

powerful anti-cancer foods. Similar foods such as onions, shallots, and leeks fall under this category. Garlic and other items in the allium family contain very powerful antioxidants that remove free radicals from the body. If you’re unsure about what we’re discussing, do some research! Garlic is also valuable as an immune booster, is anti-inflammatory, lowers blood pressure, LDL cholesterol, and detoxifies. Helpful tip: raw garlic is better for you than cooked!

2. Broccoli: Broccoli and other cruciferous vegetables are known for their cancer-fighting qualities. Other every-day vegetables that are cruciferous: cauliflower, cabbage, kale, and brussel sprouts. Cruciferous vegetables are known to be powerful cancer killers and many are rich in glutathione, known as the “master antioxidant” because of its powerful free-radical-scavenging abilities. Broccoli is also super high in powerful phytochemicals and the antioxidants glucoraphanin and indole-3-carbinol, which has been proven to be cancer-fighting.

3. Green Tea: Green tea contains some uniquely powerful antioxidants called ‘catechins’ that are strong free-radical fighters and have been shown in lab studies to actually kill or inhibit the growth of existing cancers and shrink tumors.Green tea’s two main anticancer compounds, EGCG, and quercetin are powerful weapons in a fight against many types of cancers. Also, green tea helps to promote the production of the antioxidants glutathione and superoxide dismutase (SOD) which drastically lower inflammation in the body!

4. Turmeric: The superfood turmeric has been valued as far back as 3,000 BC and is one of the most important anticancer nutrients studied today. Curcumin is the yellow pigment that comes from turmeric and is one of three known active ingredients in turmeric. Curcumin has demonstrated incredible anti-cancer benefits. In countries where people eat turmeric daily as a part of their diet, research shows lower rates of many types of cancers.

5. Ginger: Ginger is one of the most powerful anti-inflammatory cancer-fighting foods you can find! Ginger is known to actually shrink tumors and destroy cancer stem cells, as

How to Use and Store Fresh Ginger

The Importance of Self Breast Exams